Pécsi Brewery is an independent brewery with a history of 170 years of uninterrupted operation. The factory meets the highest quality standards (IFS), uses its own karst water source, and has a stable access to regional supply of ingredients. The owners have decided in 2017 to limit the annual beer production to a maximum of 200.000 hectoliter per year. Its home, the lively city of Pécs is located on the southern slopes of the Mecsek mountains in a mild climatic almost mediterranean corner of Hungary.

While our Pécsi and Szalon lagers are among Hungary’s most popular beers, the company has successfully started to market top fermented beers such as Weissbier, Pale Ale and APA. The commitment to environmental sustainability and the preservation of biodiversity motivated our team to launch our successful organic product series in 2019.

More than 170 years, propelled by innovation

Pécs* is a town in Hungary with a history so rich that books about it filled libraries. Since the foundation of the brewery the city has had its ups and downs. Yet, the Brewery of Pécs has never stopped brewing and rejuvenated itself multiple times.

The founder of the Brewery was Leopold Hirschfeld, a tradesman, who decided to add extra value to his grain business. He became so dedicated to his new venture that he chose Pécs as the new home for his family. The factory’s own ice production was one of the family’s unique innovations. After the founder’s death his son Samuel continued to build the flourishing business until the beginning of the 1900’s.

Having survived the turbulences of the 20th century with its popular beers and well-organized production, the brewery became a regional player and reached his volume peek in the 1990’s under the ownership of the Austrian Ottakringer Group.

Today the Pécsi Brewery is managed by highly qualified specialists with decades of brewing experience in small and large-scale brewing. The barley and wheat are supplied to the malting plant by the Szemerey organic farms. Water is gained directly from the Brewery’s wells, providing genuine karst water coming from the Mecsek mountains.

Being committed to environment and biodiversity, the Brewery’s experts are constantly seeking solutions for expanding organic production and thus contributing to sustainability. 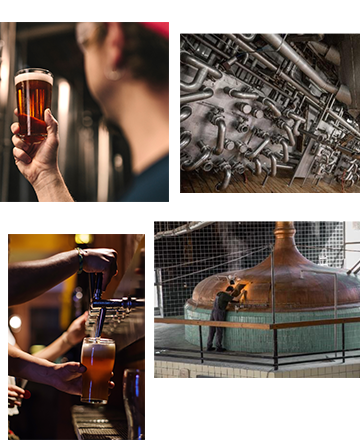 The Pécsi Brewery is currently open to visitors every Saturday from 10am to 12 noon.

We start the guided tours depending on the number of the visitors, and we welcome groups.

The visiting fee with beer tasting is 2000 HUF / person and pre-registration is required.

Please let us know if you are interested by emailing us via Rt@pecsisor.hu, and include an estimated number of visitors.

Accepted applications will receive a confirmation. We can provide bus transfer for groups who would arrive from a distance depending on individual request.

The brewing process starts in the brewhouse, where the crushed barley or wheat malt is mixed with clear water. Then an enzymatic process takes place during which the micro and macro nutrients of the malt are dissolved in water, this is called mashing. In the brewery two mashing technologies are applied: infusion and decoction mashing. The next step is wort separation where the wort is separated from the non-water soluble particles, the spent grain.

Thereafter the wort, which consists mostly of sugars, is boiled with hops. Hops give the beer bitterness and a unique, characteristic aroma according to the type of the beer. After hop boiling the hot trub is separated in the whirlpool.

This site uses cookies. By continuing to browse the site, you are agreeing to our use of cookies.

We may request cookies to be set on your device. We use cookies to let us know when you visit our websites, how you interact with us, to enrich your user experience, and to customize your relationship with our website.

Click on the different category headings to find out more. You can also change some of your preferences. Note that blocking some types of cookies may impact your experience on our websites and the services we are able to offer.

These cookies are strictly necessary to provide you with services available through our website and to use some of its features.

Because these cookies are strictly necessary to deliver the website, refuseing them will have impact how our site functions. You always can block or delete cookies by changing your browser settings and force blocking all cookies on this website. But this will always prompt you to accept/refuse cookies when revisiting our site.

We fully respect if you want to refuse cookies but to avoid asking you again and again kindly allow us to store a cookie for that. You are free to opt out any time or opt in for other cookies to get a better experience. If you refuse cookies we will remove all set cookies in our domain.

We provide you with a list of stored cookies on your computer in our domain so you can check what we stored. Due to security reasons we are not able to show or modify cookies from other domains. You can check these in your browser security settings.

We also use different external services like Google Webfonts, Google Maps, and external Video providers. Since these providers may collect personal data like your IP address we allow you to block them here. Please be aware that this might heavily reduce the functionality and appearance of our site. Changes will take effect once you reload the page.